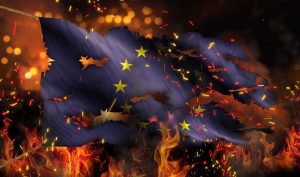 Brexit Day (originally scheduled for 29 March 2019) has come and gone, and not only is Britain still a member of the European Union, but opinion in the country seems as divided as ever regarding the referendum and what it meant (and still means). Therefore it seems an opportune time to pull together and expand upon some of the ideas that I’ve been exploring on this site regarding Brexit and its possible links to right-wing populism and nationalism.

My basic argument has always been, and continues to be, that Brexit is symptomatic of a fundamental antagonism at the heart of British society, and, in particular, revolves around a crisis of (British) identity.  In many ways this is a continuing saga, which dates back at least as far as the end of the First World War, of Britain, and more to the point, British people, trying to find a place in the world that they can feel at ease with.  In this sense both globalisation and nationalism are two ways to try and confront this question.

However, it would be a major error, in my view, to look at this as simply a ‘clash of ideologies/ values’, ‘Remain versus Leave’, and so on.  Rather, Brexit is symptomatic of a far more fundamental problem of human and social identity, and ultimately of human subjectivity itself.  If we approach the problem of identity within the conceptual framework of Lacan’s three registers (the Real, Symbolic and the Imaginary) then we can start to see, I would argue, that there are several completely (and radically different) ways to approach it.  And my central thesis is that rather than viewing nationalism (and by extension, right-wing populism) as some form of ‘regression’ and a disavowal of the inevitable ‘march of progress’ (liberal democracy, globalisation, etc) it needs to be seen in terms of a radically different ‘solution’ of the problem of identity and of finding a place in the world.

But behind these radically different approaches to the question of identity lies a more fundamental question: that of trauma.  The fundamental antagonism that I mentioned above is essentially the Real itself, which manifests itself as trauma.  And the problem of identity is essentially one of trying to find a ‘solution’ to trauma; to try and articulate a sense of meaning and being-in-the-world.  One approach to this ‘solution’ is through the Imaginary, which is also the realm of signification itself.  The problem here is that this imaginary sense of identity, of meaning, is always being undermined by the Real.

A more radical approach, however, is rather than trying to circumscribe the Real, to ‘make sense’ of trauma, is to embody it; and this, I would argue, is the basis of nationalism, and especially in its more virulent forms such as National Socialism.  So in this sense the ‘psychopathology’ of Brexit has very little to do with some form of ‘mental illness’ on the side of those who voted ‘Leave’ (or ‘Remain’ for that matter).  Rather, it is a point of intersection of the political with the psychical – but in a radically different way from the old adage of ‘the personal is political’.

Essentially, I would argue that Brexit can be seen as a manifestation of nationalism, which is itself an attempt to secure a sense of identity and ‘subjective anchoring’ in a world where identity itself seems to be increasingly ‘fluid’ and transient.  However, rather than resorting to identity politics, which is a ‘solution’ to the problem of identity and subjective anchoring based in the Imaginary register (and the direct legacy of the ‘personal is political’), nationalism is grounded in the Real.  In other words, nationalism, or rather the ‘nationalist subject’, attempts to embody the Real of the trauma, which may help to explain the inherent violence (both figurative and literal) in so much nationalist discourse and action.

It is perhaps no coincidence that many of those Brexit ‘foot soldiers’, who in many cases reside in the northern post-industrial wastelands of England, are attracted to far-right politics, for example the English Defence League, Britain First and so on.  And this is not because they are ignorant, or, as some have suggested, ‘misplacing’ their righteous anger at the economic inequalities and injustices of  modern day Britain onto nationalism whereas in fact they would be better of voting for Corbynite socialism.  Rather, their lived experience is of a different order, and occupies a completely different universe, to that of globalisation, cosmopolitanism, liberal (left) politics and a belief in the inevitable march of progress and liberal values, which for them are embodied in the European Union.